Was a Long Day and Easter Eggs

Got up early today and had to go into town and have breakfast with a very sweet lady from church... I only had a yogurt, but it was good... Then after that it was about meeting with PT to do tests and see how things are or aren't... Not sure how that is going work out... They wanted to do another test and that is a no go... So that will NOT happen ... The last time I had a spinal tap I ended up in the ER and I don't want a repeat of that one...

I had JJ today, he was good for the most part... It was great when he took his nap... Now I am ready for my nap... I have a feeling over the next couple days I am going to be tired since I had to take more medicines than usual so then I can do the stuff I needed to do today... 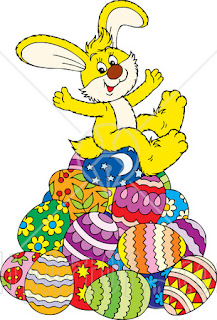 I did hear something kinda cool on the radio today... I listen to Klove or Air1 and they were talking about Easter and Easter Eggs... But this one church in one of the Southern states is trying to get thier members and parents to call thier eggs they color Spring Eggs rather then Easter Eggs... The reason behind it is that Eggs weren't really a part of Easter... So when I picked up egg dye today I told JJ that we are going to color Spring Eggs... He was ok with that... He was just happy to dye the eggs and put Christian stickers and of course trucks/cars...

Connections Between Eggs and Rabbits

The idea of an egg-laying rabbit might have started with the Romans, who believed that all life came from eggs. Another link between the rabbit and the egg comes from Pagan traditions, in which the rabbit was associated with the moon and the egg with the sun. On the spring equinox, when day and night are the same length, the rabbit and egg come together.
Early Egg Hunts

Easter Egg Hunting began in America when German immigrants brought their Osterhase tradition to Pennsylvania in the 1700s. The festivity soon spread across the nation, and baskets replaced nests. Eventually, the game evolved into a treasure hunt, and the prizes expanded from just hard-boiled eggs to include chocolate, candy, toys and coins. In many families, the Easter Bunny leaves a basket filled with gifts, not just eggs to find.

Since ancient times, eggs have been seen as a symbol of new life for obvious reasons. They have been associated with Pagan spring festivals. Some believe that the egg might represent the stone that was rolled away from Christ's tomb, revealing his resurrection.

Decorating eggs for Easter probably began in the 13th century, when eggs (in addition to meat) were forbidden during the Christian Lent season, which ends on Easter. To mark the end of the time of penance and fasting, people painted and decorated eggs before eating them. For centuries, parents emptied raw eggs and dyed the eggshells or dyed hard-boiled eggs for their children to find. Some also hand-painted the eggs with elaborate designs. Today, the colored egg has evolved into a plastic egg that you can hide a small treat inside.

More Information About Easter from EHow
Posted by Sandie at Monday, April 18, 2011