Can if Be that I was RIGHT about SpongeBob? 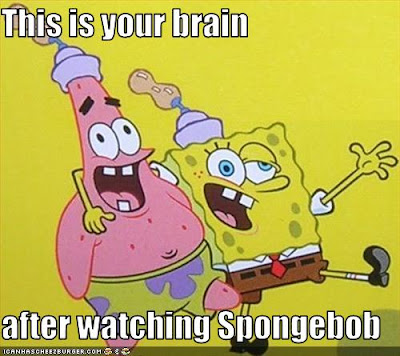 If anyone has young preschool aged kids in their home, more than likely you will know who SpongeBob Squarepants is... I would only know this because my youngest grandson JJ loves the show and they were staying with us for some time... So SpongeBob, Patrick, Mr Krabs and Squidward... There are a bunch of other characters also... Too many deep sea creatures for my brain to wrap around...  I've been waiting to do a blog like this one, lol... Finally something to prove my theories, lol... I love it when I can say I am RIGHT...

But this study that just came out has said what I thought all along... And in my brain, I don't think it should be exclusively for preschoolers... I think it works for 50 yr old truck drivers that watch the show... I am talking about my husband Chuck, lol... My dog Jasper isn't too impressed with him either... It's like ' This is your brain, this is your brain on SpongeBob, lol... But this is the jest of the study results... The cartoon character SpongeBob SquarePants is in hot water from a study suggesting that watching just nine minutes of that program can cause short-term attention and learning problems in 4-year-olds. That't not  very nice SpongeBob if you ask me and it say's alot when I observe my grandsons... It's all coming to light... Then later in the article they said:  She said parents should realize that young children are compromised in their ability to learn and use self-control immediately after watching such shows. “I wouldn’t advise watching such shows on the way to school or any time they’re expected to pay attention and learn,’’ she said. For those who have never watched the show, I will give you a rundown and of all things a short video clip from youtube...


Main Charactors: Thank you Wikipedia for the rundown... 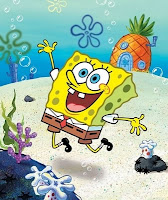 SpongeBob SquarePants is the title character of Spongebob SquarePants. He is a sea sponge who physically resembles an artificial, kitchen-type sponge and lives in a pineapple-shaped house. He is often shown in the series working at a restaurant called the The Krusty Krab as a fry cook. He seems to worship the Krabby Patty. SpongeBob's hobbies in the show include practicing karate with Sandy, catching jellyfish and blowing intricate bubbles with Patrick. He attends Mrs. Puff's Boating School, but has never passed; his lack of a driver's license serves as a running gag throughout the series. He (so far) appears in every episode in the series. He is often seen at his job. It is implied that although he has no experience, he has talent in the arts. He also is on the feminine side due to trademark issues. Green and purple were early color choices for the character before his classic and current yellow was chosen.

Patrick Star is a pink, lazy, overweight, and dimwitted starfish who is SpongeBob's best friend. He lives under a rock and his most prominent character trait is his low intelligence. Depicted as a negative influence on SpongeBob, he encourages dangerous and foolish activities that often get the two into trouble. While typically unemployed throughout the course of the series, Patrick holds various short-term jobs as the storyline of each episode requires. He is good-natured and like SpongeBob, wears his heart on his sleeve. He is "the tough one" between the two and is often called to fight SpongeBob's battles for him (although he usually gets distracted). SpongeBob is the only character that Patrick shows any real emotions for. Patrick is shown to have a mean temper in some episodes and can only be calmed by his best friend's encouraging words. 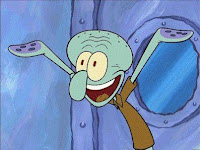 Squidward Q. Tentacles is SpongeBob and Patrick's cephalopod neighbor. Squidward has been referred to as a squid by the series creators, but he referred himself as an octopus once. He lives in a house shaped like an Easter Island Head. He loves art, and has dreams of being a great and respected artist. He also enjoys playing his clarinet, but those hearing him play it do not enjoy his amateurish playing. He works as a cashier at the Krusty Krab, a job he dislikes. SpongeBob and Patrick consider Squidward their friend, but the feeling is not reciprocated. There have been indications, though, that Squidward cares more for SpongeBob than he is willing to admit. His archenemy is Squilliam (Dee Bradley Baker), the successful version of Squidward. He met him in his high school band class. 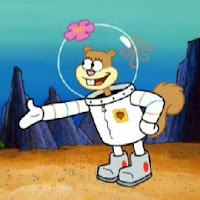 Sandy Cheeks is a squirrel who is another of SpongeBob's best friends. She is the series' only terrestrial character, living in the "Treedome", which is an underwater dome that contains a large oak tree. She is a scientist who practices karate with SpongeBob and enjoys extreme sports.She is from the U.S. state of Texas, and speaks with a stereotypical southern accent with Texas dialect.
Captain Eugene Harold "Armor Abs" Krabs (is an extremely cheap and greedy red crab. He lives in an anchor. He is the owner of the Krusty Krab, as well as SpongeBob and Squidward's employer. He also has a daughter named Pearl  (who is a whale) but there have been no references to her mother/his wife. He has a grandfather named Redbeard. The Krusty Krab was originally a retirement home called "The Rusty Krab" when Mr. Krabs bought it after the war. But then it went bankrupt, so he changed it into a resturaunt and re-named it "The Krusty Krab" In some episodes, it is shown that he has a mutual crush on Mrs. Puff. It is revealed in a 2000 episode that he was born November 30, 1942. 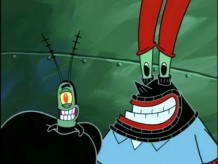 Sheldon James Plankton is owner of the Chum Bucket and arch enemy of Mr. Krabs. He is always trying to steal the Krabby Patty Secret Formula but is always unsuccessful. He often thinks and speaks of evil anarchist points of view and wishes to rule the world. He sells chum which is disgusting slop of innards and blood that is often used to attract sharks and other predatory fish. He has a computer wife named Karen, who is actually a "W.I.F.E." (Wired Integrated Female Electroencephalograph). Karen usually gives Plankton ideas to steal the Krabby Patty formula, which he often censors out and takes them as his.

Garold "Gary" The Snail is SpongeBob's pet sea snail. Within the series, snails are analogous to cats, so Gary almost always vocalizes like a feline. Despite this, other characters can understand and communicate with him. Depicted as a level-headed character, Gary sometimes serves as a voice of reason for SpongeBob, and solves problems that his owner cannot. He is sometimes nicknamed "Gare-Bear" by SpongeBob, and it is revealed in "A Pal for Gary" that his full first name is Garold.
Here is a video clip from SpongeBob... Endless Summer
Posted by Sandie at Wednesday, September 14, 2011

i dislike spongebob so much. It is stupid and has no educational value what so ever. I refuse to let the girls watch the creep creature but of scotti loves the stupid thing. ugh boys.

I'm not very fond of it either... I just don't get how they can have a beach under the ocean and all the stuff that goes on there... And the beach has water in it too... Hmmm... Maybe I don't have a good enough imagination to stretch that far, lol...