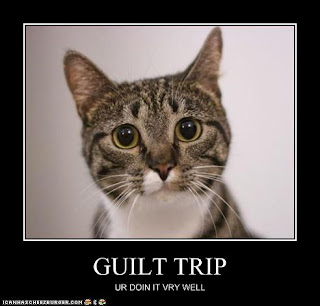 I was having this conversation about guilt tripping and manipulations... I know that guilt is a tool that Satan uses... But what about others that are around us? I think family can be the worst when it comes to manipulation and guilt tripping... I am sure I have been guilty of this one myself... For example when I would want my kids to clean their room and they didn't want too... I would tell them that if they didn't clean it then it would make me sad and I would cry and you don't want your momma to cry now do you? So when they were younger, they bought into this  manipulation and I seen that it worked and would try it any time I thought I could get by with it...  But I think family knows the right triggers to hit as adults too... They know how to say something in a way that gets you to do what they want... And it doesn't matter what the cost is... If they need or needed something, and knowing I didn't want to do it and I would pay the price later, if they worded it or whined enough, they knew I was hooked in... I don't know if this is really their fault or if it is conditioning or ??? I don't think it is healthy though... Everything comes at a price, and some are at a higher cost than others...


It really gets me when they bring my faith into it... For example when someone brings up that because you are a Christian you should always be willing to forgive and help people... And when you say no, they state that you must not be a good Christian or a real Christian because you aren't doing what the Bible says and that is why Christians are hypocrites... 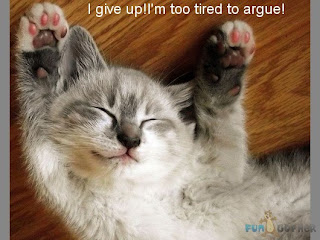 Or like for example, it was like in order to get anyone to shut up about us not wanting to do what they wanted when we were kids, you just did it... It was easier and alot less horrible to just do it... So you learn real fast that you do what is ask, no questions and then it works out for the most part... And if someone did something nice for you, then guaranteed there was a price tag involved... I think that is one of the reasons I never ask for help, because if you do that, there will be something bad that will happen down the line... I don't think things have changed much from when I was a kid...


As a Christian I know that guilt holds us captive and excludes us being closer to God. I'm not sure this posting is really about guilt rather than those who use what the Bible says and turns it into a manipulation to get us to do what they want at what ever cost there is.


Here are some verses that come to mind:
Now when I think of these verses, I know there is alot more going on and we need to study everything around them... But I have known many non-Christians that seem to know these verses better than alot of Christians... My only reasoning for that is because they use it as a tool to manipulate people who are Christians... I'm not saying everyone... But  have known some who will say that if you don't help so and so, than that just shows us that you are't a Christian like you say you are... Which in turns puts the Christian on defense and opens the door to whatever is to come next...

But then in my thinking we are also told to not be a fool... I think GUILT TRIPPING and MANIPULATIONS is a big thing for many... I know there are many times I will give in when someone goes on and on and on about something... Even when I know it is wrong, and when they bring up the Bible verses and use them in the conversation, I go on the defense and I know at that point I have been defeated by this tool...

I think lately what is getting me and most everyone knows this is that even though they know how I am feeling and that has not been very good, it still seems to happen all the time... It's like I just throw my hands in the air and say 'What Ever"...

There must be alot of people that have the same problem... There is page after page in Google on this topic...    I would like to thank my friend who helped me word this blog all and have it make sense for me... I am sure it took some time to do that :)
Posted by Sandie at Monday, June 13, 2011

Good evening Sandie, this is Laura. I liked this blog posting. I tried to email you but your email came back to me. I can see how this is a big problem that Christians and Non-Christians face. I won't go into details, but I know this person who's family takes advantage of her and have no regard for her health or personal needs. My feelings are that there are medical problems that will take her life, however the stress that her family is putting her through is going to make that a much faster process. The kind of stress that my friend has with her family is speeding the deterioration of her disease and mental status. My prayer is that my friends family will see how all the things going on around her is killing her. My heart hurts thinking about the possibility of the things that are to come when is ready to meet Jesus. Then I think about how much worse the stress is going to make this transition to a new life in Christ. Thank you for posting this. I will be sure to share my thoughts with my friend in a loving and caring way. I will call you in the afternoon when I wake up. Love you.

On forgiveness--Forgiveness means that we do not hold something against that person any more. Jesus does not hold our sins against us if we accept Him into our lives. HOWEVER--forgiveness does not wipe out the consequences of our bad choices.
Who do you accept truth from, those unbelievers who misuse the Word in order to manipulate, or the Holy Spirit who teaches us the meaning and proper application of the Word. You cannot save everyone from the consequences of their life choices and sins. In fact, perhaps our own attemps to intervene in people's lifes and protect them from themselves actually KEEPS them from the experiences that will drive them ruinning into the arms of Christ.
When you know the truth in your heart it will set you free, Sandie. To continue to allow people to manipulate you when you know it is happening--what is that?

Hi Laura... I will talk to you this afternoon... I have to go into town and will have some time to kill anyhow...

Comment 2... Yeah I know forgiveness should be wiped out once you are forgiven... I have forgiven many and I go to help out and get burned again and again... I have told my daughter the same thing that you can't save everyone... She has what I call the puppy dog syndrome... It is a made up word, but I think I do the same thing... I know 100% that only the truth that is in God's Word is right... I should know that if they use the Word against another than that isn't right and I shouldn't even entertain the thoughts. I'm not sure how to answer the allowing people to manipulate... Then what... I will have to think on that or discuss that with someone... I'm up in the air on it...