Are You Being Abused? Elder Abuse 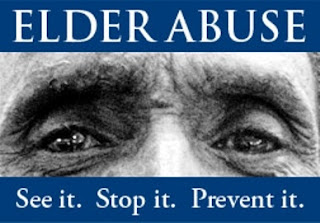 I was talking to someone earlier today and we were talking about how things are going for her... She was talking about the threats and mistreatment... Some of the horrible things that he was threatening are above the abuse mentally and physically... What bothers me is that one day something will happen and she won't have anyone there to help her when something happens... Nobody should have to live with the threats and living everyday the way she is...  I was happy to hear that she was able to talk to the Adult Abuse department... That makes me feel better knowing there is someone watching out for things that are going on... It helps to have extra eyes...

The information that is in red is from a separate website called helpguide.org... There is alot of information on this website...

Elder abuse tends to take place where the senior lives: most often in the home where abusers are apt to be adult children; other family members such as grandchildren; or spouses/partners of elders. Institutional settings especially long-term care facilities can also be sources of elder abuse.

At first, you might not recognize or take seriously signs of elder abuse. They may appear to be symptoms of dementia or signs of the elderly person’s frailty — or caregivers may explain them to you that way. In fact, many of the signs and symptoms of elder abuse do overlap with symptoms of mental deterioration, but that doesn't mean you should dismiss them on the caregiver’s say-so.
There are many forms of Elder Abuse... But the type of abuse that I am thinking about when I am talking to this person is the Physical and Emotional Abuse...
In emotional or psychological senior abuse, people speak to or treat elderly persons in ways that cause emotional pain or distress. 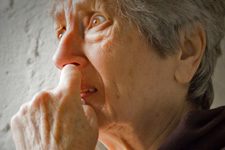 If you are an elder who is being abused, neglected, or exploited, tell at least one person. Tell your doctor, a friend, or a family member whom you trust. Other people care and can help you.
In the U.S., you can also call Eldercare Locator at 1-800-677-1116.