Friends! This is something I have been thinking about alot lately... What makes a good friend and when do we need to reconsider if someone should or shouldn't be in our lives... Not sure if I'm thinking about this when it comes to one person or many or maybe none at all and it's just a fleeting thought that nags at me... 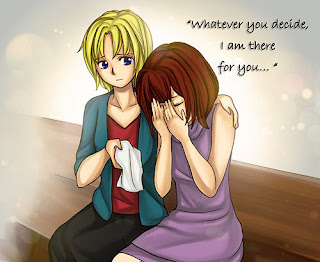 Good friendship is based on trust. If you break a friend's trust, the friendship may be very hard to salvage. Of course, if you have made a promise and planned to keep it, but circumstances beyond your control conspire to prevent it, let your friend know as soon as you find out. Don't wait until 15 minutes after you were supposed to arrive to call and say, "Gee, I'm sorry." Instead, make a quick call to say, "Hey, I know I promised to help you with whatever it is, but my husband is telling me we're going to our country house for the weekend, and leaving tomorrow just after work - that means I won't be able to make it. I'm so sorry. Can we reschedule?" That's just honoring the fact that your friend is counting on you, and respecting the fact that, given a little notice, your friend might just be able to get someone else to help with whatever it was. At least you won't be hanging your friend out to twist in the wind.

Give thoughtful advice when asked, but don't insist that your friend does as you say. Don't judge your friend, simply advise them when they reach out for advice or when they need to hear a little tough love to keep them out of dangerous situations where they might harm themselves or others. Tell your friend how you perceive their situation using factual information, and suggest what you might do in the same circumstances.

Avoid saying "You should..." That may feel like you are imposing "shoulds" upon your friend and they're much less likely to listen.
Listen. You don't have to agree––just listen to what is being said. Make sure to stop talking for a moment and listen. Some people don't really find it interesting listening to someone talk about your or their feelings 24/7. If you're monopolizing every conversation with your feelings, your friend isn't getting anything out of the relationship. For example, don't sigh and groan like the world is against you. Seek help elsewhere and try to stop being paranoid. Listening opens space between the two of you and reassures your friend that you're not judging them.
Don't be selfish. Grabbing, stealing, envying and/or begging are big nos in the rules of friendship. The friend will soon get tired of this and eventually move toward more selfless people who are willing to give the same as one gets, but a good friend will not demand it, yet one might mention being tired of it. Even if you are a total wreck , don't expect constant sympathy.
Don't expect, demand or abuse generosity or wear out your welcome. When your friend does something nice for you, then reciprocate quickly. Money isn't, or doesn't have to be, an issue.

Go home when it seems like the time is right; don't be like furniture. Reach for the door knob and say "Bye." Turn the knob, leave...no one wants to be friends with a moocher or to feel usedStep back and give your friend space. Understand if your friend wants to be alone or to hang out with other people. Allow it to happen. There's no need to become clingy or needy. Friendship doesn't require that you always have to be paired together. Allowing one another the time to hang with other friends gives you much-needed breathing room, and allows you to come together fresh and appreciating each other even more.
Live by the golden rule. Always treat a friend as you would want to be treated. Don't do or say anything that you wouldn't want done to you. Be there through thick and thin as long as that is how you feel as a true friend. Don't begrudge everything as a favor that has to be repaid immediately.
Don't set too many expectations and rules. Tapping other people in your dimension. Allowing your friendship to evolve and change naturally is really best - it allows your friend to be as unique and individual as you are, and for both of you to enjoy one another in that light.

What I look for in a Friend: