What a wild ride this weekend 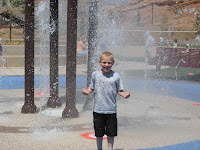 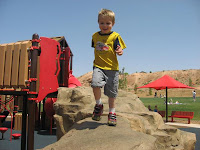 Well, I picked up my grandsons, Tyson and Jace and we decided to go to the Roadrunners baseball game. Should have known a storm was brewing. Not only did it rain and was windy and cold. For me to say it is cold, well, it must have been cold,lol. But we enjoyed ourselves anyhow. The Roadrunners lost 13-3. Hummm, that isn't a good start of ending to the night. But to make things worse, my van decided it wanted to act up and it blew its stack. Not actually a stack but its head gasket. So out poured the smoke from this poor van. But all was not lost. I called my daughter Beckiah to come and get the boys and called AAA to come and get me and my van. Nope not a Chevy Van, a Ford Windstar, lol. But all is well and all are safe at home and God is looking out for us all.
Posted by Sandie at Sunday, May 25, 2008