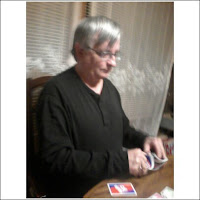 Today was fairly calm... We woke up to go to church and then on the way on I stopped and got stuff to make homemade lasgnana. I can't stand frozen. I think it is because I don't like recotta cheese. But we got home, Chuck was trying to rush me out of the store. He was reminding me that I needed to hurry up because Bridgette had to be at work at 3pm. Well, little did either one of them think that we had set our clocks back. So we gained an hour. So Bridgette was at work an hour early... Thats what they get for trying to rush me, lol.

But after Chuck got home from taking Bridgette to work, we played Skip Bo... I must say that Craig cheated,lol. I don't know how. But I didn't win one game, lol. He skiunked us both. But seriously, he didn't cheat, but it is just wrong that I didn't win at all :). After I lost royally, we watched Extrmeme Home Makeover. We really enjoy that show. It would be awesome to have a house built by them. Craig keeps telling me that he should put me in for it, lol. I told him that I don't think I am that good. Most of the people selected for this are really good and deserving people. I am just average, like anyone else.

But other then that, I am going to take a shower and try to get some sleep. I hope you all have a good night and God Bless.
Posted by Sandie at Sunday, November 02, 2008