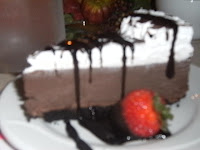 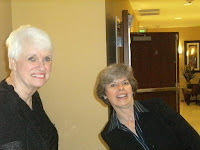 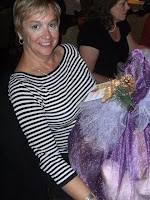 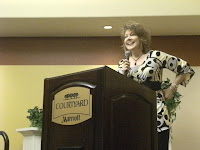 Tonight my niece Bridgette and my friends Stephanie and Brenda went to the Tender Touch Gala. It was really nice getting out for the night and not having to think about much, but at the same time, thinking about other things if that makes sense.

Kenna Turner West was the guest speaker. She is from Tennesee and has a 15 yr old son. She is also a Dove Award Winner and performed with Amy Grant, Bill Gaither and many other singers and she is a recording artist in her own rights.

There was alot of food, fun, laughter and crying. She was telling us about her grandmother who passed away about 8 yrs and her battle with Alzhiemers. She was describing her and how even though she couldn't remember who she was and who her daughter and family was. She still knew the words to Amazing Grace. Isn't that awesome. There were many tears in the audience when she described her grandma. She also talked about her son and how he is going blind and the struggles he has. But what was awesome is that she still praises the Lord through all the stuff going on. She praised Him during the storm and in the good times. As a side note as well, tonights Gala went to help Hope Pregnancy Center and the DOVE Center.

She was funny as well. She showed that is is ok to laugh and have fun and still love the Lord and that He loves us. There were many highlights from tonights Gala. If you are in Southern Utah, you should check it out next year. We also have Tender Touch meetings every 4 months. I will be posting those days on here. But all in all it was a good night to get away and think about something else.

I also donated one of my Christmas Baskets to the Gala, I hope the lady who won it is happy with the contents :)

P.S. Jessica, when you read this. Donna Sharp told me to say hey to you. I posted her pic here for you from the event.
Posted by Sandie at Saturday, November 01, 2008