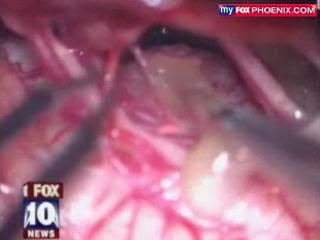 The other day I was listening to KLove Radio Station. They were going over a story that they just heard. So I thought I would share it with you all...

This lady went to the Drs to see why she was having headaches. They did a MRI or Cat Scan, Can't remember which it was. But they noticed that she had a growth or tumor in her brain. Hence the reason for the headaches. They sceduled brain surgery for her. They opened her head and got to the place where the tumor was, only to find out that it wasn't a tumor at all. It was a worm. They said it was the kind of worm that is in uncooked pork. My brain is gagging over this whole issue by now.

I knew you had to cook meat all the way, especially pork, chicken and eggs. But never in my mind would I have thought that a work would be able to come from that and grow in the brain. I could see maybe in the stomach or something, but the brain... What is up with that. But needless to say, I think I will be sure to cook my meat all the way. Just think a worm was crawling around in her brain. Ughhhhhhh and yuck...

Here is the actual Story from Fox News Az:

Doctors in Arizona thought a Phoenix-area woman had a possible brain tumor, but it turned out there was something else penetrating her brain – a worm.

Rosemary Alvarez started experiencing numbness in her arm and blurred vision. She went to the emergency room twice and had a cat scan, but everything came up clear, MyFOXPhoenix.com reported.

It wasn’t until doctors took a closer look at an MRI that they discovered something very disturbing.

“Once we saw the MRI we realized this is something not good,” neurosurgeon, Dr. Peter Nakaji told the news station. “It's something down in her brain stem which is as deep in the brain as you can be.”

Alvarez was wheeled into surgery where Nakaji and his colleagues were expecting to remove a tumor, but they uncovered a worm instead.

On a video of the surgery, Nakaji can be heard chuckling after he made the discovery.

“I'm sure this is a very strange response for the people in the operating room,” he told MyFOXPhoenix.com. “But because I was so pleased to know that it wasn't going to be something terrible.”

Doctors removed the worm and don't believe Alvarez will have any lingering health problems. No one knows exactly where she picked up the worm –- doctors said worms can come from eating undercooked pork or spread by people who don’t wash their hands after using the bathroom, according to the report.

“It only takes one person who is spreading it constantly to get a lot of people exposed and some of those people are going to go on to develop this problem,” Nakaji said.

Alvarez, who is now healthy and has resumed normal activities such a playing ball with family in her backyard, said she hopes people learn this lesson from her story.

“I'm sure this is a very strange response for the people in the operating room,” he told MyFOXPhoenix.com. “But because I was so pleased to know that it wasn't going to be something terrible.”

No, that may not be terrible but still...Gross!