Christmas Tree is Down- Today is Actually Christmas 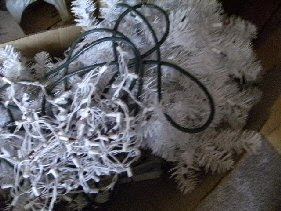 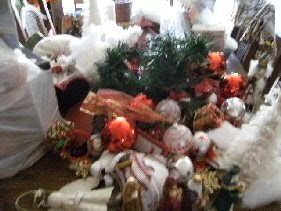 I finally got my Christmas stuff down and not yet packed in boxes. But it is on my table at least, lol. Next year we are going to do things a bit different... You see in alot of countries Christmas isn't celebrated on December 25th. That is actually the 1st day of the 12 days of Christmas. My mess of things on my table are posted on here. Now I just have to put them away, ughhh, no fun.

Below is the Reasoning in Part:

Christmas (IPA: /krɪsməs/), also referred to as Christmas Day, is an annual holiday celebrated on December 25 or January 7 that commemorates the birth of Jesus of Nazareth. The day marks the beginning of the larger season of Christmastide, which lasts twelve days. The nativity of Jesus, which is the basis for the anno Domini system of dating, is thought to have occurred between 7 and 2 BC.December 25 is not thought to be Jesus' actual date of birth, and the date may have been chosen to correspond with either a Roman festival, or with the winter solstice.

In the Early Middle Ages, Christmas Day was overshadowed by Epiphany, which in the west focused on the visit of the magi. But the Medieval calendar was dominated by Christmas-related holidays. The forty days before Christmas became the "forty days of St. Martin" (which began on November 11, the feast of St. Martin of Tours), now known as Advent. In Italy, former Saturnalian traditions were attached to Advent.Around the 12th century, these traditions transferred again to the Twelve Days of Christmas (December 25 – January 5); a time that appears in the liturgical calendars as Christmastide or Twelve Holy Days.


Some of the Perks:
1. Beckiah and Jason won't have to eat three Christmas Dinners
2. After Christmas Sales
3. Chuck will have time off to help with shopping and will be very happy over less money spent
4. Jessica and Jason can fly here cheaper since it won't be over Christmas.
5. I don't think Jesus would mind at all, since neither day is His actual birthday
6. I can have fun and do the twelve days of Christmas the right way.
7. I can devote time helping with Dixie Care and Share

No Other disadvantages that I can see right now...
Posted by Sandie at Wednesday, January 07, 2009

Another disadvantage I can see is the kids not understanding right away and being upset. And not all after christmas sales are good. Love ya.

You are right, that is a disadvantage. My kids aren't little, so it isn't much of a problem. I think it would be great for us... But it would be hard to get kids to understand, plus the school problem, since they are on vacation during that time.