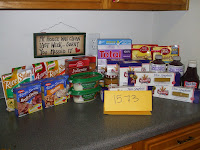 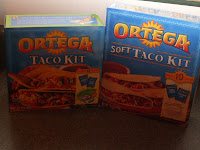 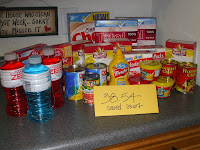 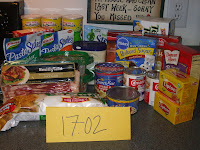 Harris Teeter is once again offering triple coupons at their stores from Feb 5th until Feb 8th for face value of up to .99. I went to Harris Teeter 3 times today because you are only allowed to use 20 coupons per visit.
My first trip was to the store in Licolnton/Boger City and I spent 15.73 I saved 8.83 using my vic card and 43.02 using my coupons my total before my savings would have been 67.58.
My second trip I made in Mooresville it didn't go so well though and I can't blame anyone but myself for it. I went through the line and when I got ready to hand them my vic card I notice that my wallet was not in the diaper bag and that I left it in my car. So JJ and I ran out to the car to grab my wallet so I can get my discounts and pay for my food. When I got back into the store I handed the cashier my vic card and my total came up to 38.54. I was a little confused about the total because I was thinking it should have been a lot less. So when I arrived home I called the store to ask if they were offering triple coupons like the one in Lincolnton was and they said yes that they were I explained to them that I don't think that my coupons tripled so the customer service associate took my number and hade a manager call me back a little while later so that they could look over the receipt. When they called me they said that not only did I not get the credit for the triple coupons but I also didn't get credit for the double coupons. So according to my calculation that total of 38.54 should actually be 16.59 with a savings on my vic card of 11.36 and coupons would be 32.85 my total before savings would be 60.80.
My final trip went pretty good and I had no problems I spent 17.02 my vic savings was 7.79 and my coupons was 39.23 total before savings would have been 64.04.
All together my total would have been 192.42 and after I get my receipt fixed I will have only spent 49.34.

Thats pretty awesome deals. I wish we had triple coupons here. Maybe when we go to Phoenix, we can find some deals at Frys or something. We will have to look into it. Love ya

Good job on using your head and waiting for the deals and the coupons to come out. We spent $87 at Albertsons yesterday on thier 10 for $10 and buy 3 cereal and get a free gallon of milk. Good job.