What's At the End of the Rainbow? 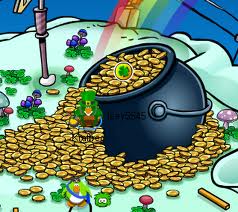 As I was heading into town to get Chuck and Bridgette, I seen a really pretty rainbow forming to the left of me... And smack dab in the middle of the end of the rainbow in the field was a cow... I wonder what that cow was thinking about when he had the spotlight on him... It would have been great if I had my camera with me at the time...
The Meaning of the Rainbow:  From Wikipedia
According to Christianity and Judaism, after Noah's flood the rainbow gained meaning as the sign of God's promise that terrestrial life would never again be destroyed by flood (Genesis 9:13–17):[29]

A rainbow spans a continuous spectrum of colours—there are no "bands." The apparent discreteness is an artefact of the photopigments in the human eye and of the neural processing of our photoreceptor outputs in the brain. Because the peak response of human colour receptors varies from person to person, different individuals will see slightly different colours, and persons with colour blindness will see a smaller set of colours. However the seven colours listed below are thought to be representative of how humans everywhere,[35] with normal colour vision, see the rainbow.
Newton originally (1672) named only five primary colours: red, yellow, green, blue and violet. Later he included orange and indigo, giving seven colours by analogy to the number of notes in a musical scale.[36]
Red:     . Orange:     . Yellow:     . Green:     . Blue:     . Indigo:     . Violet:    .

Ok, enough about the logistics of the rainbow... My thought on this is that it was pretty cool driving down the road and looking in the middle of a field of grazing cows and see a rainbow right there...
So the next time you see a cow, look for a rainbow... There may be one there or a thousand other places. I don't think I would be looking for pots of gold anymore :) Unless the cow I seen in the rainbow is the golden calf from the Old Testament... And if I were you, I would not be building any alters out of golden calf's... God was not pleased at all... Read more about the  Golden Calf
Posted by Sandie at Sunday, December 26, 2010