We're not suppose to be Judgmental

Tonight I am chatting with my daughter Rebechia on Facebook and we are discussing the topic of tonights blog... We are not suppose to be judgmental, however that is easier said then done, or atleast for me it is... 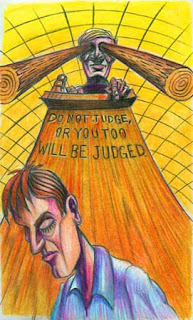 1 Samuel 16:7
"Stop judging others, and you will not be judged. For others will treat you as you treat them. Whatever measure you use in judging others, it will be used to measure how you are judged. And why worry about a speck in your friend's eye when you have a log in your own? How can you think of saying, `Friend, let me help you get rid of that speck in your eye,' when you can't see past the log in your own eye? Hypocrite! First get rid of the log from your own eye, then perhaps you will see well enough to deal with the speck in your friend's eye."


You know people who do that kind of thing, right? And many of us – maybe most of us - know what it’s like to be on the receiving end of people who judge others. Jesus says that we need to  be careful. Whether it has to do with people’s actions, or lifestyle, or children or weaknesses or sins or worship preferences. Be careful, Jesus says. Jesus knows that we have a tendency to bring out the faults of others and down play our own sins. We tend to have a better view of our own opinions and a more negative view of anyone who thinks differently.

Jesus calls us to work with each other, speaking the truth in love and encourage one another. We have a responsibility for each other, and if we see sin we have to deal with it – Jesus says that too. But it’s our attitude, our motivation... it is the condition of our heart that really determines if we are building and discipling in love for the other person, or if we are just being judgmental.

My daughters pastor brought up a good point when he was saying that when we look at someone who looks differently or are doing something that we feel is wrong, we don't know personally what they are going through and we should not judge someone else based on what we observe only. For many people judging others are their favorite past time. The prettiest girl, the jock, tattoos, too fat/thin, not dressed appropriately,  the wealthy or other favorite people, often become the targets of hateful tongues and thoughts. I guess you would not even have to be in a favored position to have others "bad mouth" you. It is very easy to take part in judging those around us if they do not come up to our expectations.


One example that I think on is Christian Rock bands such as Skillet. By looking at them, you would think they are far from being a Christan and more than likely worshiped someone else or nobody at all... I did not believe it when my daughter Jessica told me they were until I actually read the words and more about them. I thought they were just another rock band that was way to loud and taking up too much air time :) I was wrong and that showed me that I need to not judge people because they don't look like I do or how I think they should look to be a Christian or part of a certain group.  Then you have my daughter who has a tattoo, many people think that if you are a Christian you should not have tattoos. It is of a cross on her leg  with roses. For myself I would never want a tattoo, but she got it for the right reason and a demonstration of her faith.  I have been guilty of judging others based on the tattoos that they have on their body. I personally believe that they reflect what you feel and believe. Then I think about how people change from what they once were, even though they have made mistakes, which we are all guilty of.


In Closing: THERE IS NOTHING WRONG WITH CALLING A ROTTEN APPLE . . . A ROTTEN APPLE! God is the only one who can judge another. Jesus was very clear about his admonition to "not judge others". But never take that to mean that we should turn our heads to sin, and not speak out about what GOD SAYS is wrong! The Bible clearly says, "You will know a tree by the fruit that it bears"