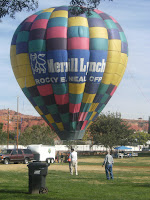 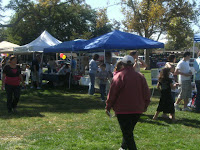 Today was the Community Services Expo. It went really great. The weather was perfect and not too hot or cold. It was right around 80 or so. We couldn't have asked for a more perfect day.

We had around 30 non-profits and about 12 or so churches that came out to participate. There was alot of food and the music was awesome. DJ Lex did the music and we had so many people that commented on how nice it was over the live entertainment. The local news was out and as was Mayor Dan McArthur. He is a nice guy... This was the first time I met him. The Hot air balloon was a big hit. The crew with the balloon ended up donated all the money they raised to the Expo. Which was awesome of them and unexpected. It took so many people to make this happen. Many give me too much credit for it. I may be the president of the Expo. But it took everyone to pull it off with such great success.

We also had some awesome prizes that we gave away as drawings.

Lins Marketplace gave a 3 minute Western Family Shopping Spree away... What was so cool about this was the winner was a man that is working on getting his own place and is living in Dixie Care and Share- For those outside of St. george, that is a homeless shelter and food bank. I was more then happy about him winning. 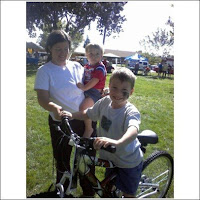 McMillans Mortuary donated a Mountain Bike. What was cute about this was the little boy that won, was so happy. He couldn't reach the peddles, but he was making a go of it,.lol

Sunset Framers donated a lovely picture that had three Kokopellis on it. The winner was overjoyed with it...

Jessica Ross(Mary Kay Consultant) donated two gift baskets from Mary kay... One was for men and the other was for ladies. It was funny when the DJ won the mens one. But what is interesting about that is that his ex-wife sold Mary Kay and he loved the skin care... And he was happy that he won... And with the awesome deals Jessica is offering right now... They will be checking her out at http://www.marykay.com/jessicaross

Some of the other gifts were gift certificates to taco Bell, The Egg and I, McDonalds, Tuachan Theater Tickets, Food Storage Items, Night at the Movies Gift Basket, Movies about Pornagraphy and more...

It turned out great... Soon I will have pictures on our website located at http://www.communityexposgu.com
Posted by Sandie at Sunday, October 19, 2008