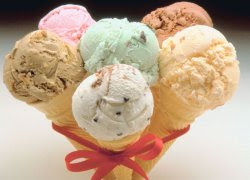 Ok, a show of hands on how many would buy Ben and Jerrys Ice Cream if they made it with breast milk. Yuck, caugh, spit and choke on the thought of that one. There is no way I would buy that. Well, Peta is suggesting to Ben and Jerry's that they start using breast mile rather then cows milk.

Well, I am all for animal rights. Not a problem there at all. But even the thought of that would make me want to give up ice cream forever and ever.... Yuckkkk and double yuck.

This is what Peta said.... Hummm, lol

Breast milk ice cream is actually not a new concept. The Mother's Milk Ice Cream Co. has been in the business of whipping up ice cream with donated breast milk since 2001.

Offering seasonal flavors, such as mango, raspberry, fig and avocado, the company also sells old favorites like vanilla bean and coconut. The business originated as an experiment of the Department of Biology at the University of Miami, and has since grown into a viable trade.

If ice cream is not to your liking, Indrani has several recipes for making cheese and soup from human breast milk. Explaining that as someone who donates breast milk, there are times when bags remain in the freezer past their three months expiration date, and since throwing them out seems wrong, the next logical step is the use of the human milk for cooking.

Breast Is Best, But Is It Taboo For Adult Consumption?

Breast milk ice cream, breast milk cheese, and even breast milk soup may appear odd to the average consumer of ice cream, cheese, and cream soups. We may enjoy cheese with copious mold, or ice cream made from cows' milk that comes from hairy, smelly animals treated with hormones, antibiotics, and who knows what else, but we are squeamish when it comes to ingesting human milk.

Ok, I will sum this up by saying "Squeamish is putting it mildly" No way no how would I eat or drink that. Again, Yuck and Double Yuck
Posted by Sandie at Sunday, November 16, 2008

Nasty to the Nth degree! Gives me shivers and a stomach ache at the same time. I like my steak and ground beef and all that. I know the process of slaughtering the animal is gross. That's why I'm in denial about it. But I believe if God hadn't wanted animals for consumption, it wouldn't have happened. ya know?

You are so right... I think they could kill them more humanly, but I also think that God created animals for eating. It says that in Bible that we are to eat... I will be in denial with that one too.

Gross gross gross. No way would I eat anything with breastmilk in it.