I was Impressed With Bush Today! 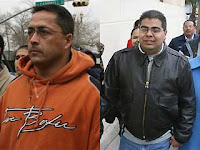 I'm not one that is easily impressed by the decisions President Bush makes. But today, has to be one of those rare occasions for me. I am sure he is a very nice guy that has a good heart. But I sure didn't like him as President.

President Bush commuted the sentences of Border Patrol Agents Ignacio Ramos and Jose Compean today, his last day in office. When he gave out pardons at the end of the year, I was surprised that he didn't pardon the agents. I was wondering like millions or others if Bush would ever do the right thing.

Two former U.S. Border Patrol agents -- Ignacio Ramos and Jose Compean -- are serving 11- and 12-year prison terms for attempting to apprehend an illegal alien drug smuggler. The smuggler, who was transporting 743 pounds of marijuana (about $1 million worth), was given full immunity to testify against our agents, free health care, and free border crossing passes that he used to transport more drugs into the U.S.

I am very happy to hear that the right thing was done and that they are going to be released. I just can't understand why it took so long and why they were ever convicted of this crime. I think it is horrible that they got thrown in prison for shooting drug smugglers.

I am sure the families of both of these men have been put through the ringer and are devastated to say the least. In my opinion these men should never have been convicted yet alone go on trial for this. They should have been commended for stopping drug smugglers from entering our country and putting their stuff on our streets.

The commutation ends their sentence on March 20, 2009. However word is coming that they will be released within 30 days.
Posted by Sandie at Monday, January 19, 2009

lol, you are so right. Can't figure out why it took him so long to see something needed to be done...