This is a God thing for sure... I had JJ and Bridgette in the van and we were heading to drop the van off in Washington at my husbands work so he can get home tonight. 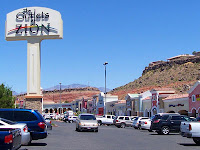 We turn on River Rd at the Zion Factory Outlet and I just get around the corner and JJ is saying from his car seat to Go Fast GG- Go Fast... So I am going to humor him since I am not up to speed yet... He gets a kick out of the van/car going fast. But this time it was very important. Just as I got up to speed, not even a 1/2 second behind me a car comes speeding out of the Zion Factory outlet... I am wondering if it was someone trying to steal the car, because they were going very fast, didn't stop or anything. I would say they were going was over the speed limit through the parking lot, and a very crowded one at that. 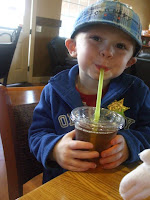 Back to the incident, I get up to speed and this car comes flying out, and the green car that is directly behind me is hit by this car that literally took flight because it was going so fast. A  police officer was getting ready to pass this car ... The sirens and lights went on from the police officer... I was really glad to see that there was a police officer so close and at the scene. I was wondering if the officer was going to give me a ticket because I speeded up before that because of what JJ told me, although I was still not up to the speed limit for that road.  But I looked in my rear view mirror to see the car hit the one, roll in air/bounce off the car, land on it's wheels and land across the street at another factory outlet area and finally skidded to a stop at the Chilies.... If it wasn't for JJ saying Go Fast GG-Go Fast, we would have been the one hit and our van would have had alot more damage since it is a taller vehicle. I am sure that God put those words into JJ's little 3 yr old voice in order for me to speed past the area where the car came flying out of... It would have hit Bridgette's side without a doubt.

Poor Bridgette is still shaken and said her life flashed before her eyes. I was thinking at the time to get far enough ahead in case this becomes a police chase and not get run over in the process and get to a safe place and distance... I guess that's the defensive driver in me... But this time I was so tired and eyes burning because of being so overly tired... Not sure my reaction time would have been a good one without JJ's input.

I do hope and pray that everyone involved in this accident is ok and that nobody was seriously hurt... I just read more on Dixie Press and I guess three were injured and they are unsure as to what exactly happend, but the car was equipped with handicapped equipment...
Posted by Sandie at Thursday, December 09, 2010