Today has just been one of those days... Not really going to post much on here since I'm not feeling good and overly tired... I think today is one of those days where I need to spend all day in bed and see if that helps... I did get some medicine for the nausea, which is a plus big time... Now if it works, that will be a even bigger plus...I think I am at a point where I want to throw my hands up in the air and say "I Give Up"... Not wanting to deal with it anymore... I think if I had a towel in my hands I would throw it in...  Good thing I don't... But I am hoping that tomorrow is a better day... I do wish my headache would go away, even though it isn't as bad as it gets... I am thinking it is the medicine that is causing todays... I am thinking I need to go to bed and should, but then its just after 5pm, so wonder if I will sleep tonight... But then again with all the meds I just took, that may not be a issue :) 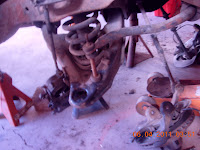 Chuck is going to work on his truck and hopefully get it going... Something needs to be done with it and get that front end put back together.... He hasn't been able to get it licensed yet because it won't pass the safety inspection and now he is putting the whole front end together this weekend... We've had it a few months and still can't get it to where we can legally drive it... I hope at-least and then it is going to be time to do the van... I'm not sure what to do about that thing and what would be the most cost effective... The transmission is going on the van, so not sure if it would be better to just find a new tranny, sell what we can on it or  ???
Posted by Sandie at Saturday, June 04, 2011

Sandie! I hope you get feeling better. I will stop up and see you this week or maybe we can go out to lunch and have light lunch when your in town. Since it is your birthday on Saturday, it will be my treat. I want to keep tabs on you and care about how you are feeling. I hope the medicine for the nausea works for you. It should. I will call you and we can see what works for you and me.

You need to take a couple days and do what you want to do, not what anyone else wants to do. Or you can go into hiding and take a break and get some rest.

On the van problem with the transmission problem. I would sell it and then you will break even or come out ahead. Those transmissions for what you have are very expensive and have always had problems.