My Thoughts on the Olympics

I don't know about you, but I like watching the Olympics... I like the sportsmanship that most countries display... Even thought Team USA Men's Basketball wasn't being very sportsmanlike when they slammed Nigeria by 83 points... I don't see that as being a good sport... But in defense of the USA team, I found this on Yahoo...
"We didn't play LeBron [James] and Kobe [Bryant] in the second half, and with Carmelo shooting like that, we benched him," Krzyzewski said. "We didn't take any fast breaks in the fourth quarter, and we played all zone. You have to take a shot every 24 seconds, and the shots we took happened to be hit.
One of the other things I love about the Olympics is all the countries that can get together and not fight... They all compete and share their love for sports... I can't help but wonder why it can't be this way all the time and not just during the Olympics... The one person that stands out to me is Guor Marial... Guor is a refugee without a country...


(Yahoo News) Marial was born in what is now the Republic of South Sudan, a newly independent country without a National Olympic Committee, an IOC requirement for nations to be able to compete in the games. 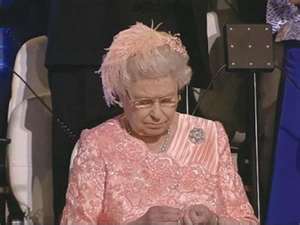 Another thing that I found kinda funny, but I guess it depends on who you ask... During the opening ceremony Queen Elizabeth parachuted from a helicopter... OK, it wasn't really her... She had a stunt double... I don't see her literally jumping out of a plan... She can leave that to her grandsons... But I found it funny or maybe sad on some level that as her country passed by her, she was sitting there picking her nails... But thankfully William and Katherine are more in-tune with those around her... They actually sat in the crowds with their countrymen... Maybe they should have been the ones jumping from the helicopter and representing their country... Even though I have to give the Queen some credit... She is getting up there in age and is probably tired since this was late at night... I thought London put on a good opening ceremony and they deserve respect and congrats on putting on a great Olympics...

Team USA- Michael Phelps (Gold) Ryan Lochte (Silver)
Kudos to all those Olympians that are participating in the Olympics... These Olympians put years worth of work into making it to this point... Even when they don't medal, they are winners... I participated in sports and would compete in cross country, track and field and basketball... It takes a tremendous amount of dedication, training and will to get to where they are now... I admire those counties that may have only a few Olympians there representing their country... I think it is awesome when I see a country with only one person who medals... I do love it when I hear about our country medaling though... As of the time of writing this blog, we are leaders for medals with 43 medals and China is at 42... God Bless the USA...
I think it is pretty cool to see  First Lady Michelle Obama being there for our country and our Olympians... I liked what she had to say;


"Being an Olympian is not just about winning gold medals and setting records, Michelle Obama said on Friday, as she urged youngsters to stay healthy and "believe in" themselves.

Olympic athletes are not simply born, but work hard for their success and refuse to give up, the US First Lady said.


"Whether or not you grow up to become an Olympian or Paralympian, you all have so much promise. I want you all to know that.
"Think in your heads 'I'm important, I have promise, there are things I can do'.
"I believe in each and every one of you."
Posted by Sandie at Friday, August 03, 2012